We have discussed the subject of engine exhaust analysis in previous posts here and here.

Drivers in who are interested in the results of their automobile’s e-test results, will notice some recent changes to the test parameters.

Here is a comparison between test results on the same car between 2010 and 2014. 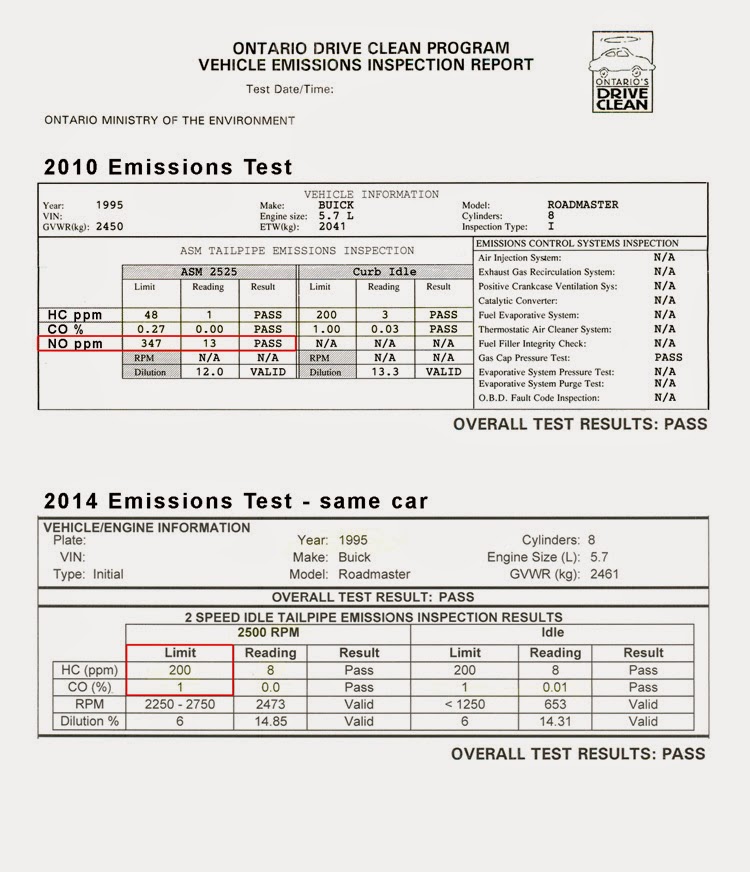 The test case shown in the picture is of a large automobile with a large engine. The test results show very low emissions because this particular vehicle has been expertly maintained.

changed its Drive Clean procedures in January 2012 to use onboard diagnostic (OBD) testing equipment instead of tail pipe emissions. However, on pre-OBD2 cars such as the one in the picture, the tail pipe test will still be used.

In the 2010 example above, the test included a Nitric Oxide (NO) test during the under-load condition. Excessive oxides of nitrogen are generally caused by anything that makes the engine’s temperature rise. Simply putting the engine under load by raising the RPM instead of idling will increase the NO / NO2 output. On the 2014 test, the NO portion of the test has been eliminated.

The CO / HC limits are also different now. High Carbon Monoxide (CO) levels are associated with anything that causes the air/fuel mixture to be richer, or higher in fuel, than is ideal. High hydrocarbons (HC’s) can be caused by several conditions, most of which are related to improper fuel combustion, such as engine misfire. Both tests in the picture include measurements of CO / HC’s. But the limits are now the same for the load and non-load portions of the test.

Over the years, the drive-clean programs in various places have reportedly caused the repair or removal of most high-emissions automobiles from the roads. The newer engines have lower emissions in general. Also, OBD2 testing that ignores actual tail-pipe emissions has apparently produced misleading results in some test cases. This has prompted many to think that the whole drive-clean program has served its purpose and should be phased out.

We have been manufacturing engine exhaust analyzers for many years now and have definitely noticed this general trend toward low emissions measurements in modern engines. For example, we offer a %  or ppm range for CO measurement. The ppm range is much more common now for vehicle testing.

In view of the modern downward trends, we will no doubt develop lower range options in the near future.